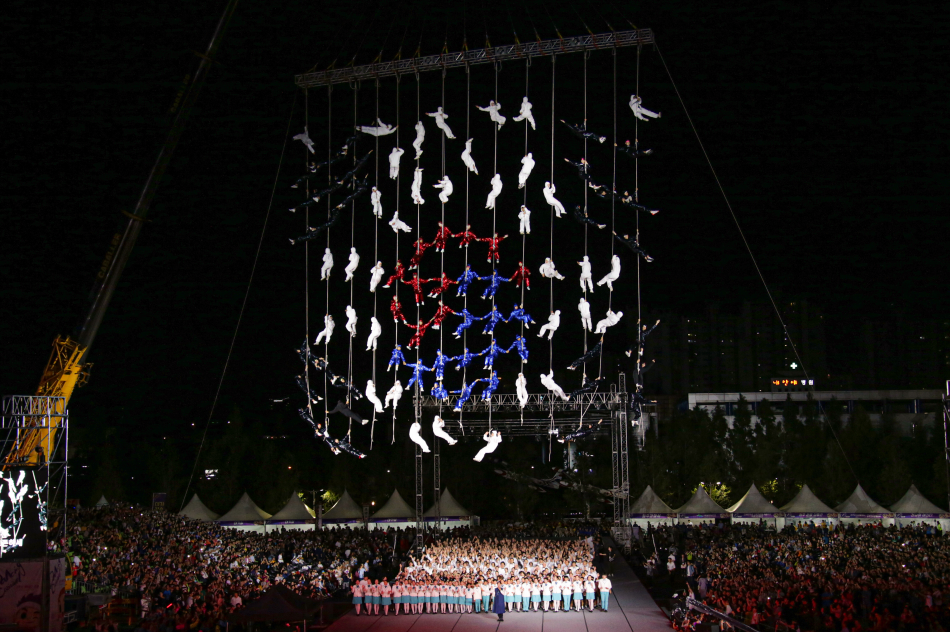 Wonju Dynamic Dancing Carnival is an international festival led by the citizens from the preparation of the event to the stage performances. Dynamic dance parade performances will take place on a giant 100-meter long and 15-meter wide runway. 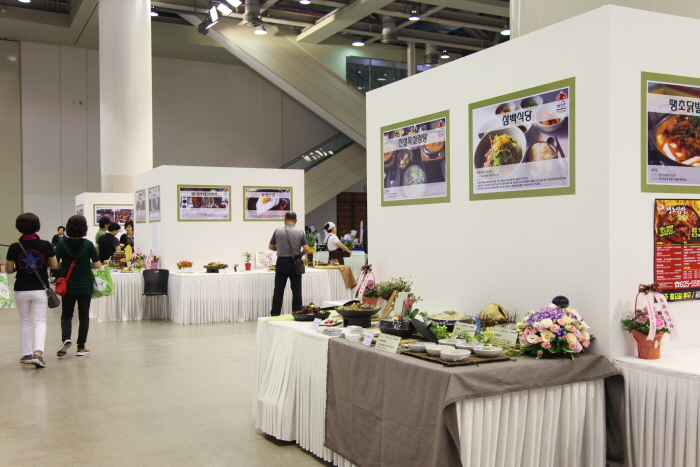 Seeking to become better and more advanced every year, the Korea Food & Tourism Expo offers a wide array of hands-on experience programs and seminars on food culture. Those hoping to participate in contests or special exhibitions should sign up on the festival website. For more information on the festival schedule, please see the website or call festival organizers using the number provided. Namdanghang Port, located at the west end of Hongseong, is a famous west coast port known for its exceptional seafood. Surrounded by the clean waters of Cheonsuman Bay, Namdahang Port is home to a wide array of sea life including blue crab, cockle and webfoot octopus. Namdanghang Port also draws throngs of visitors from early September to mid-October every year for the country’s largest Jumbo Shrimp Festival. Ansan Reed Marsh Park is an environmental treatment facility and Korea’s first large-scale artificial wetland, using reeds and other aquatic plants to improve the water quality of branch streams (the Banwol, Donghwa and Samhwa) flowing into Sihwaho Lake. It is an ecological park where people can rest amid nature and where the interested can observe and learn about the park’s ecosystem. 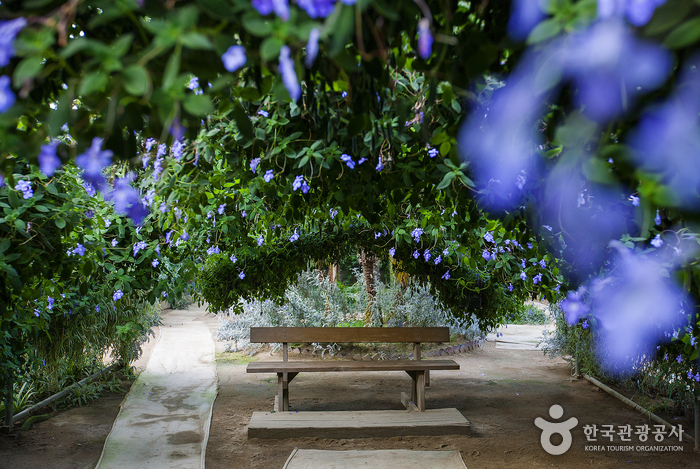 World Flower Botanical Garden opened to the public in 2004 and sees 15,000~20,000 visitors every year. This internationally recognized garden is Korea's largest greenhouse garden that features over 3,000 species of plants and flowers. To cultivate gardening culture in Korea, the garden founded LIAF Garden Center, acronym for "Life is a Flower." The garden center offers diverse gardening programs and products. 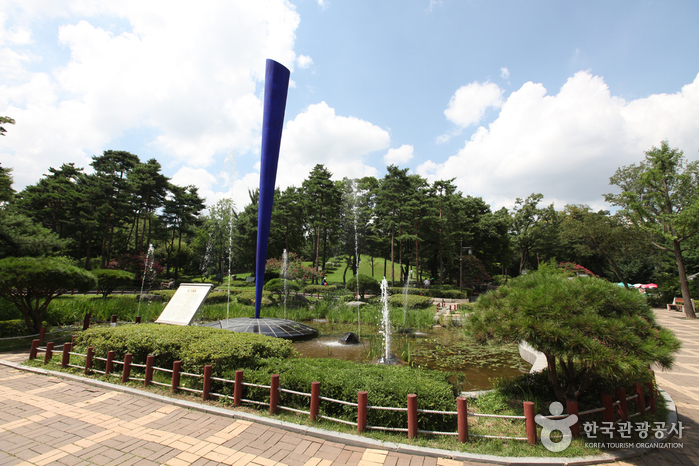 Hyochang Park covers 122,245 square meters spanning across Hyochang-dong and Cheongpa 2-dong. It is a historic landmark that once contained several royal tombs, and was known at that time as Hyochangwon. The cemeteries that were originally located in Hyochangwon belonged to Crown Prince Munhyo, King Jeongjo’s first son who died only at the age of five; Royal Noble Consort Uibin of the Seong Clan, King Jeongjo’s royal concubine and Crown Prince Munhyo’s mother; Royal Noble Consort Sugui of the Park Clan, King Sunjo’s royal concubine; and her daughter Princess Yeongon. The royal tombs were moved to Seooreung Tombs in the waning months of the Japanese colonial period. The Japanese empire began the development of Hyochangwon into a park in 1924, and the Japanese governor-general officially assigned the site as a park in 1940.

Presently, several of Korea’s greatest leaders are buried in Hyochang Park. The remains mostly belong to independence activists including Yoon Bong-gil, Lee Bong-chang, and Baek Jeong-gi, whose graves are collectively known as Samuisa Tomb. A statue of Lee Bong-chang has been built in the graveyard. Among the other patriotic martyrs who are interred in the park are Kim Gu and some of the key figures of provisional government such as Lee Dong-nyeong, Cha I-seok, and Cho Seong-hwan. An ancestral shrine named Uiyeolsa has been built along the main gate and holds the portraits of the deceased independence activists. 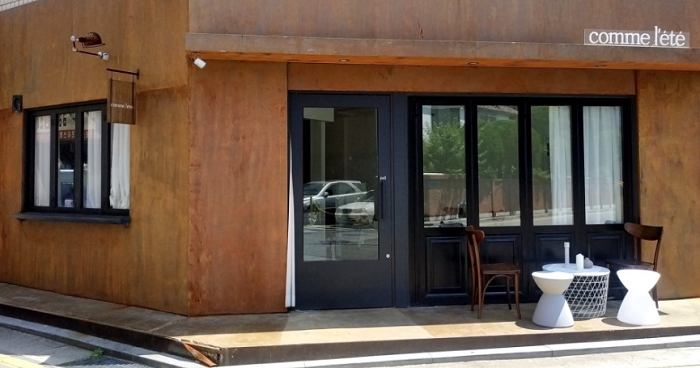 A dessert specialty store run by two French pâtissiers. The best menu at this restaurant is dessert. This cafe is located in Seocho-gu, Seoul. 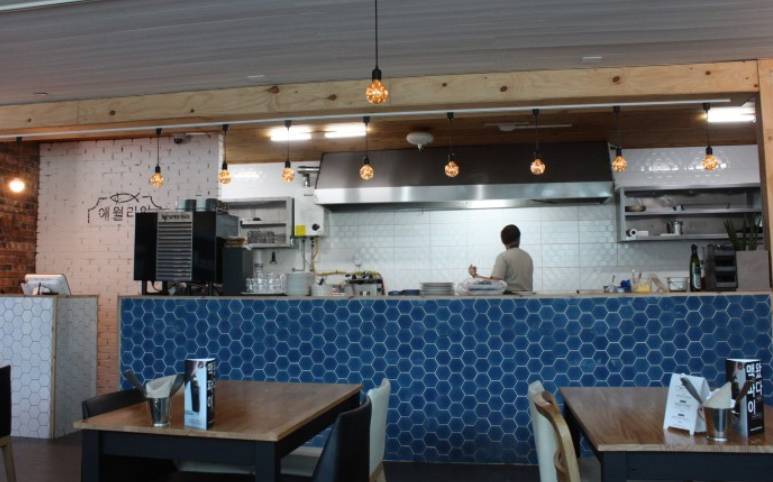 A seafood specialty restaurant located in Jeju-si, Jeju-do. The most famous menu is grilled assorted seafood. The chef is from the hotel. 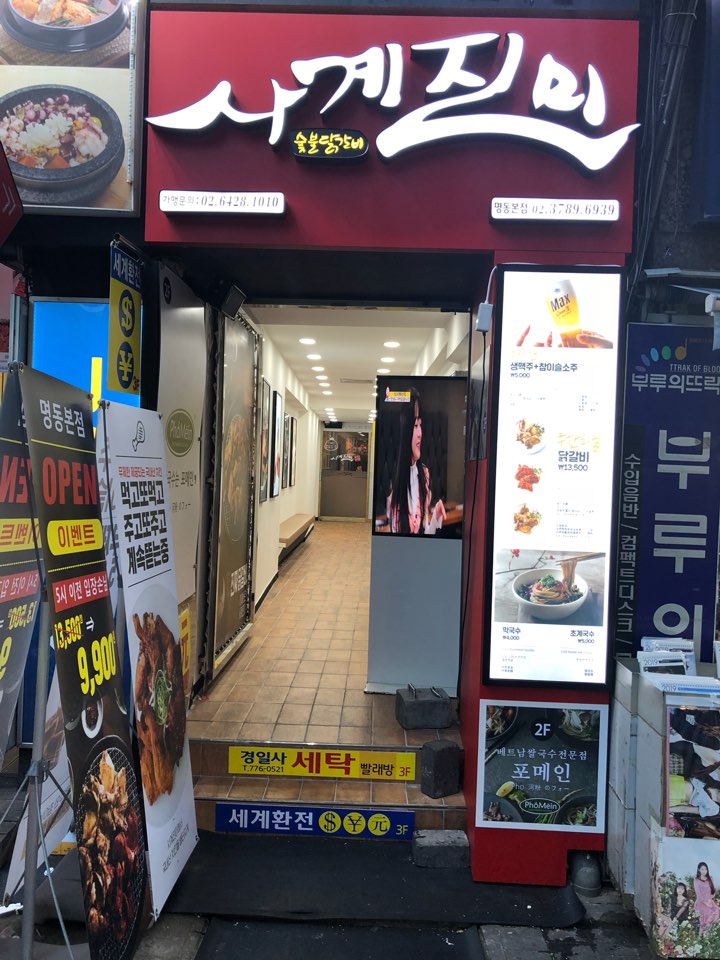 This is a Korean cuisine located in Myeong-dong, Seoul. A restaurant where you can try Korean BBQ chicken. The representative menu is Spicy Stir-fried Chicken. 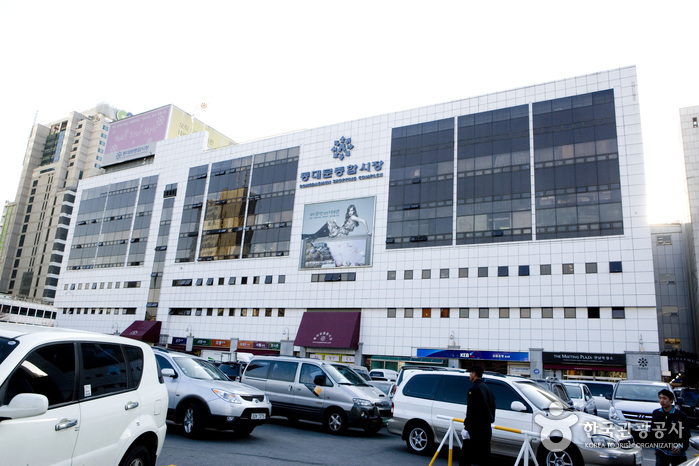 As one of the largest markets in Asia, Dongdaemun Shopping Complex boasts huge hanbok shops. Most of the major hanbok and fabric distributors are located here. It offers a wide array of hanbok from traditional hanbok to modernized hanbok in addition to accessories and clothing materials. Dongdaemun Shopping Complex is a popular spot among international tourists who want to experience traditional Korean culture and purchase various souvenirs. 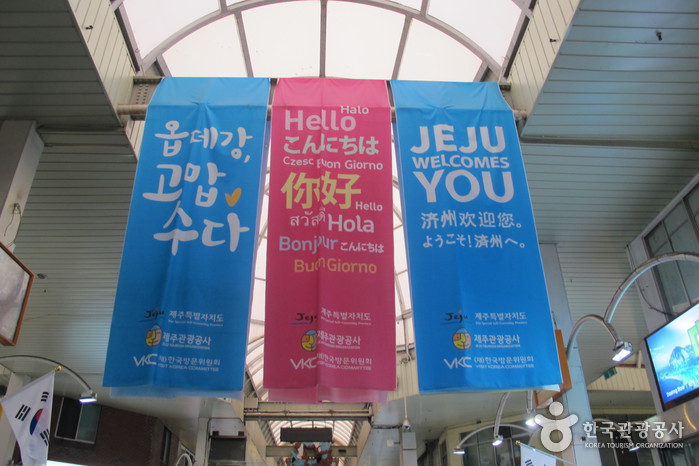 Seogwipo Maeil Olle Market is the largest market in Seogwipo. It is a traditional market that was formed in the early 1960s and is a mainstay in the Seogwipo economy. Starting from 2001, the market expanded its shopping center and now stretches over 620 meters in length. The interior of the market is designed in such a way that visitors can easily navigate through shops and vendors. For customers' ease, the market offers free delivery service as well as cultural programs and outdoor performances. 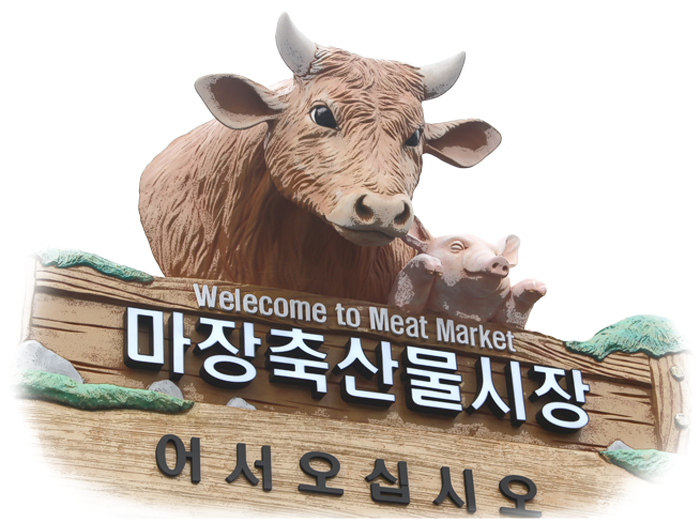 Majang Meat Market is the largest meat market in Korea. It is equipped with Korea’s most modern and cleanest facilities. The butchers here are proud of the market's size and hygienic facilities.

The market sells fresh meat arriving every hour from all over the country and from overseas. The prices are overtly marked for each meat along with the country and place of origin. For the market's efforts to provide quality products, the market is recognized by the Korean Medical Association (KMA).

Traders are able to trade easily thanks to the market's state of the art systems. At Majang Meat market, high quality meats are available at up to 30% less than at supermarket chains. 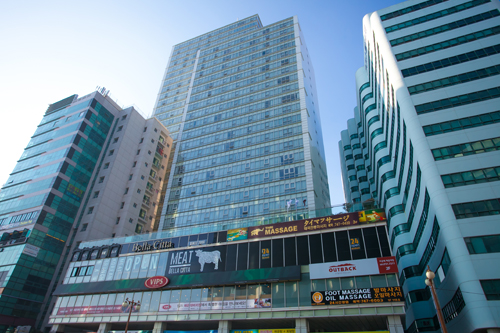 As Busan’s first residence hotel, Seacloud Hotel is a 30-story building commanding a great view of Haeundae Beach. All the guestrooms are furnished with kitchenware and dishes for the guests to cook if they so desire. The first through third floors are called the "Shopping Arcade" with numerous restaurants, Thai massage parlor, and convenience store. This residence hotel has a total of 209 Superior, Deluxe, and Executive Suite Rooms, all of which offer a view of Haeundae Beach and the blue ocean. One of the advantages of staying at this residence hotel is that all the guestrooms overlook Haeundae Beach and the sea. All the rooms are a free Wi-Fi zone. Other amenities include outdoor swimming pool, Jacuzzi, and fitness room overlooking Haeundae Beach as well as laundry service, 24-hour security system, and large parking lot. It's a 50-minute shuttle bus ride from Gimhae Airport, a 50-minute taxi ride from Busan Station, and within a 5-minute walk from Haeundae Station on Busan Metro Line 2. 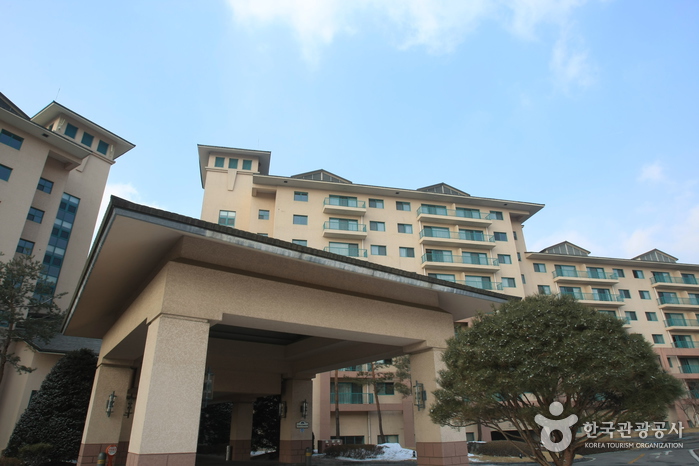 Oak Valley is a family resort that offers beautiful facility with golf courses, thrilling ski slopes, leisure and convenience amenities, and European-style condominiums. The resort's golf courses were designed to work with the naural environment and the course-management is eco-friendly. The resort offers both a members only and public course and a variety of events are ongoing throughout the year.

Other amenities include a banquet hall, wedding hall, swimming pool, tennis court and mountain biking. Families and friends alike can join this resort all year round. 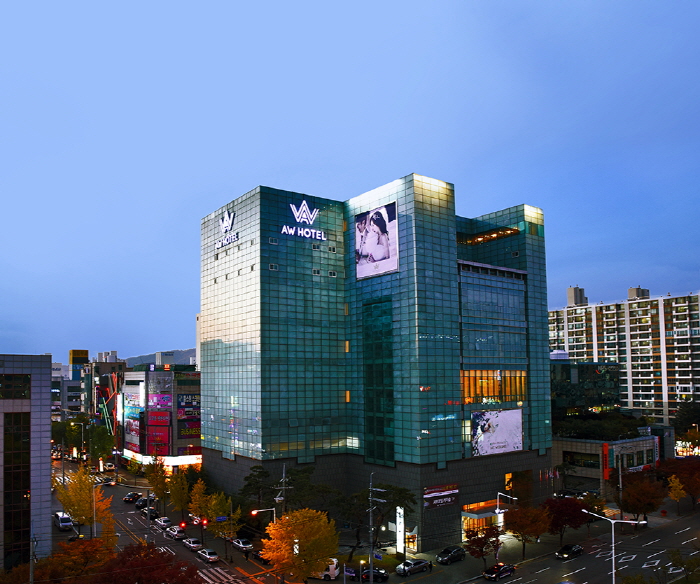 AW Hotel is conveniently located by Seongseo Industrial Complex Station (Daegu Subway Line 2). It is close to Waryongsan Mountain, Seongseo Sports Center, parks, and Daegu Seongseo Industrial Complex is only 5 minutes away, making AW Hotel perfect for business trips. Also, each room is equipped with a fridge, mini bar, WI-FI, and other facilities. The hotel has a restaurant and coffee shop for a more convenient stay. 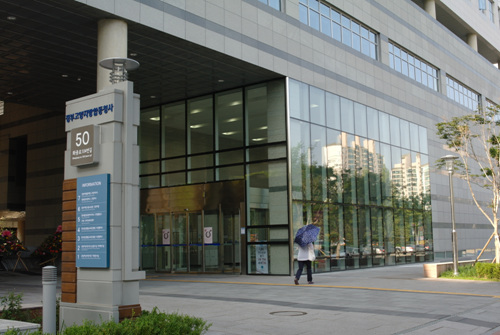 The National Women’s History Exhibition Hall opened on December 9, 2002 in Daebang-dong, Seoul, but was moved to its current location in Goyang, Gyeonggi-do on September 1, 2014. The hall uses both traditional display techniques as well as creative media art to showcase the history and culture of women in Korea. The exhibition hall aims to give women their rightful place in Korean history, in addition to enhancing women’s sense of pride and expand gender equality through various activities, including public education programs and special exhibitions. 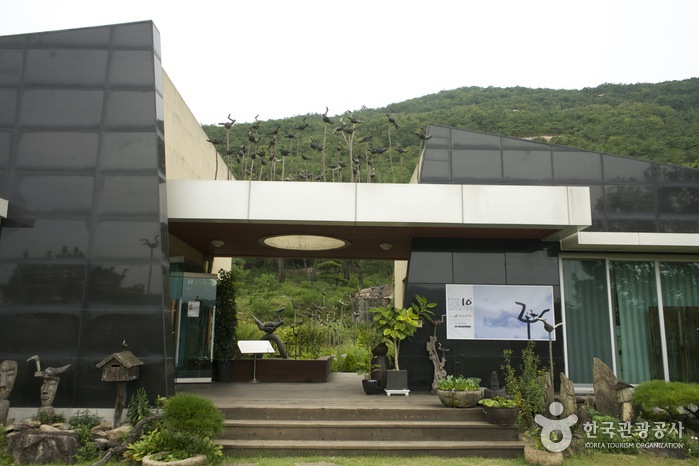 Neunggang Sotdae Art Museum in Jecheon is a museum of sotdae, ancient prayer poles with a duck or bird-shaped figurine on top that were usually placed at the village entrance. Many of these artifacts can be found inside and outside of the museum, which is located near the vast Chungjuho Lake. Other nearby tourist attractions include Neunggang Valley, situated at the foot of Geumsusan Mountain and surrounded by lush pine forests, rocky cliffs, streams and waterfalls. There is also Jeongbangsa Temple, which is said to have been built by the renowned Buddhist Monk Uisang, during the Silla era. 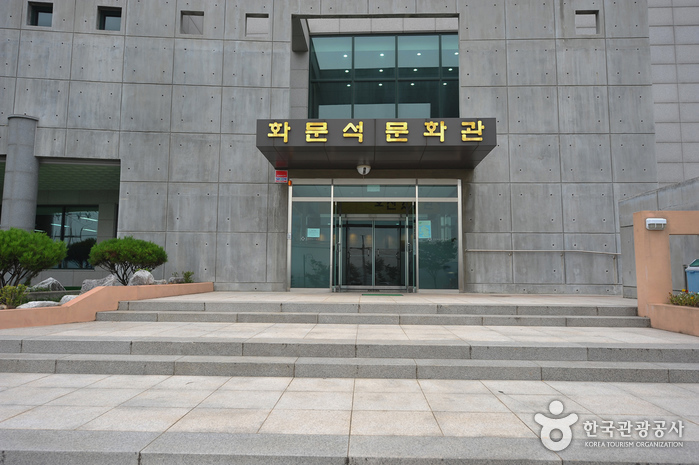 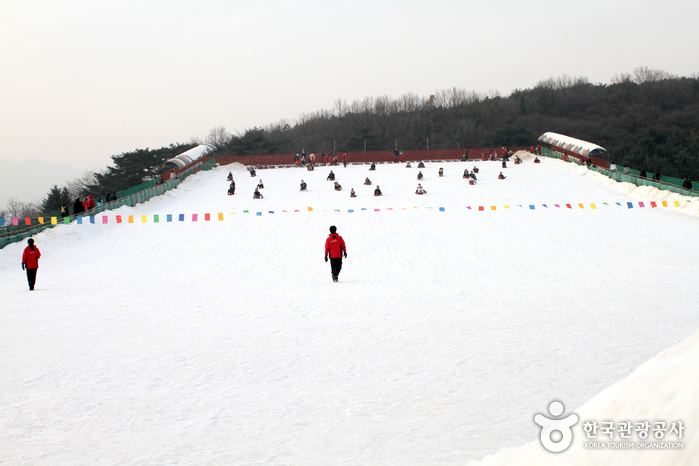 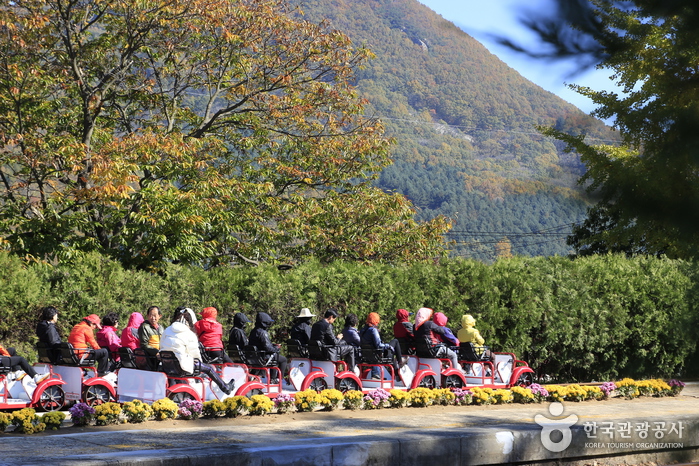 After Gyeongchun Subway Line opened, the old train tracks turned into a rail bike park. Gangchon Rail Park starts next to Gimyujeong Station and offers various attractions including large book photo zone, café, zipwire and more. The total course of the rail bike is 8.5 kilometers long with 6 kilometers on rail bike and last 2.5 kilometers on a train. Most of the track is downhill for an easy ride with a beautiful view of mountains, fields, and a river. With an additional fee, visitors can enjoy the VR experience section of the ride. After riding the final section on a train along the Bukhangang River, riders will take the shuttle bus back to the original location. There are also a 7.2-kilometer-long Gyeonggang Railbike that starts from Gyeonggang Station at a separate charge.