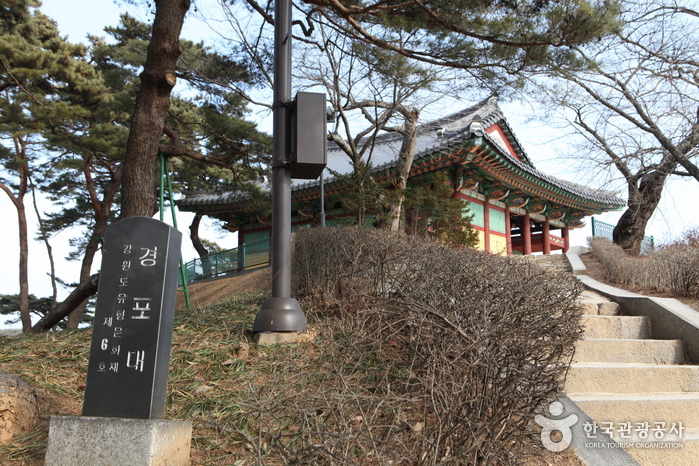 Gangneung Bau-gil Road is a 150-km walking trail comprised of 10 courses including mountain ranges and coastal sections, including Baekdudaegan, Gyeongpo, and Jeongdongjin. “Bau” means “rock” in the Gangwon-do dialect. When the people of Gangwon-do refer to Gangwon-do in a friendly way, they call it “Gamjabau.” Like the name, Gangneung Bau-gil features human-friendly trekking courses through beautiful nature. By traveling on foot, people can enjoy the tranquil scene and the scent of pine trees from the forest that makes up almost 70% of the routes. 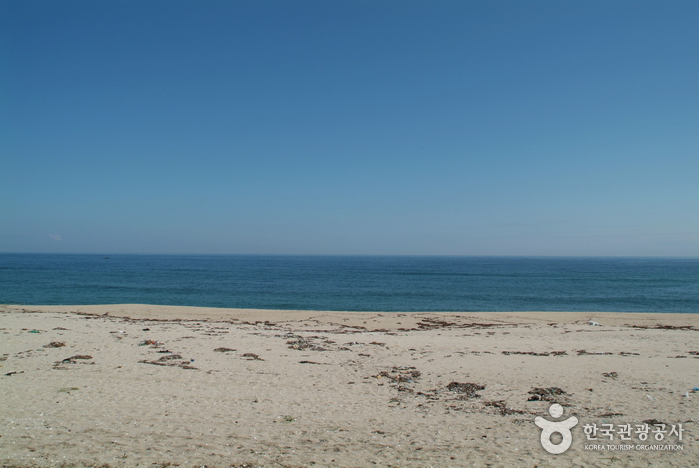 Nestled between Gyeongpodae Beach and Yeongok Beach, Sacheon Beach is a clean and quiet beach covering an area of 19,000㎡ and a length of 300m. The beach opened on July 1, 1975; because Gyeongpo Provincial Park is just nearby, many vacationers choose to come here during the holidays. Thick pine trees cover the area, and its clean white sand and shallow waters make this area an ideal place for rest and relaxation. 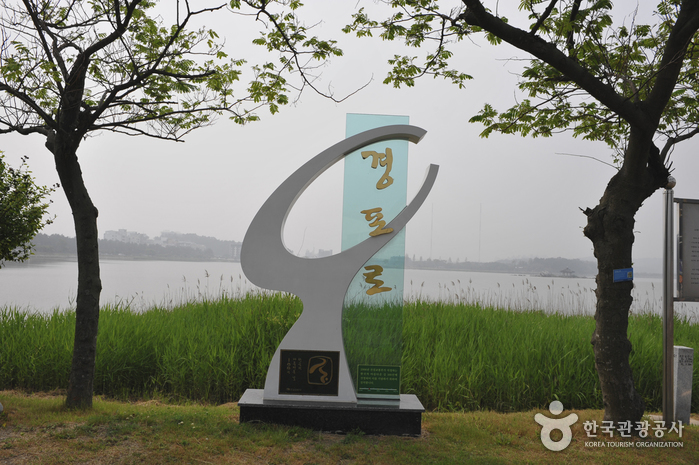 Gyeongpo Provincial Park was officially opened on June 26, 1982 (Total size 9.471㎢, Gangwon-do Provincial Notice No. 90). It houses many cultural assets and memorial sites centered around Gyeongpodae Pavilion, Gyeongpoho Lake, and Gyeongpo Beach. One of the eight scenic spots in Gwandong (old name of Gangwon-do), Gyeongpodae is famous for viewing the moon, as well as fishing at Gyeongpoho Lake. However, fishing is now prohibited due to the lake being designated as a natural protection area.

Gyeongpo Beach is thought to be the best beach on the East Coast. The crystal waters of Gyeongpo Beach, elegant Gyeongpo Lake, Gyeongpodae Pavilion, Banghae Pavilion, Hohae Pavilion, Gyeongho Pavilion, and Gyeongyangsa Temple make Gyeongpo Provincial Park a great vacation attraction year round. Known as one of the most scenic locations in Gangwon-do for a long time, visitors can enjoy cherry blossoms in the spring, swimming in the summer, and deep-sea fishing and walking on the beach in the winter. 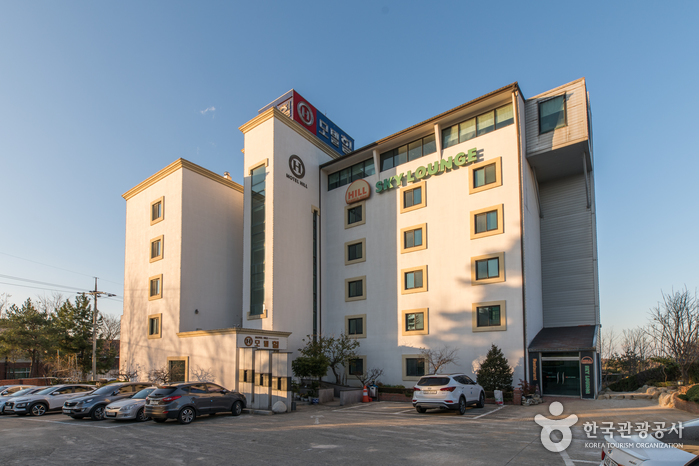 Motel Hill is a five-story white building located near the East Sea, which can be viewed through the window from the guestrooms. Guests can take a walk along the trail between the motel and Sacheon Beach. The motel is a mere 10-minute ride from downtown Gangneung and is near some of the most popular tourist destinations in Gangneung, including Gyeongpo Beach, Jumunjin Beach, Ojukheon House, and Sogeumgang Mountain. The cozy guestrooms come in three different types: Standard, VIP, and Suite. The guestrooms are furnished with TV, refrigerator, air conditioner, toiletries, sofa, computer, and other necessities. It also has a parking lot that’s big enough for tour buses. 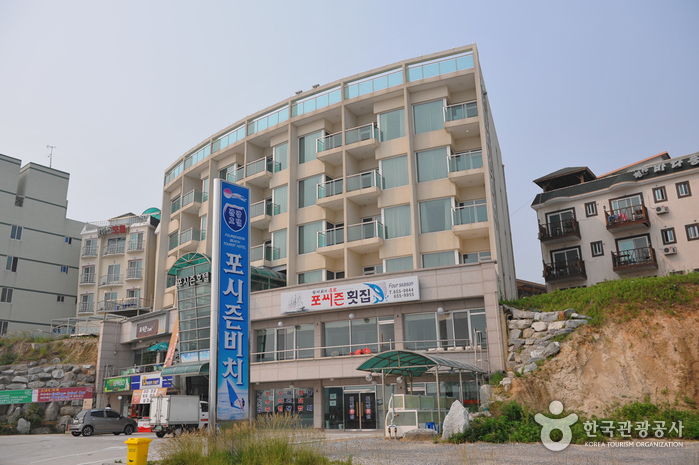 Gangneung Four Season Hotel is located on the northern end of Gyeongpo Beach. Located merely 50 meters from the ocean, the hotel offers 4.4m-wide windows in its guestrooms, allowing guests to enjoy a clear view of the East Sea from the comfort of their rooms. 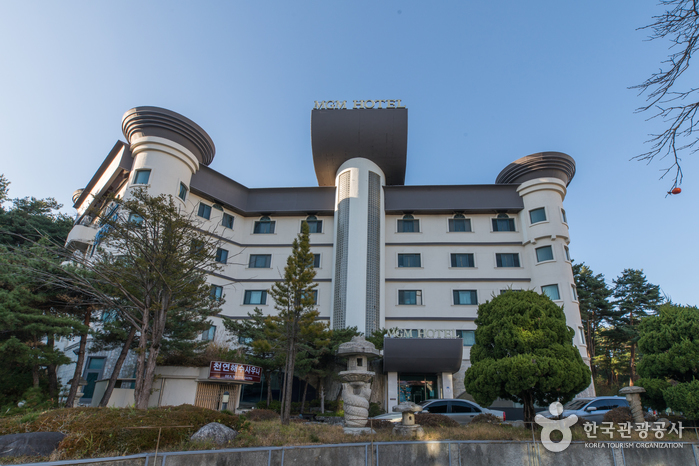 MGM Hotel located on Gyeongpodae Beach, Gangneung, which is one of the most popular tourist destinations in the country throughout the seasons, offers friendly services in addition to comfortable rooms. The hotel is a six-story building that can accommodate up to 150 guests. Room types include Standard Double, Twin, Standard Ondol, Junior Suite, Family Suite, and Suite, and each room offers a different seasonal view. There are pine and bamboo groves near the hotel for the guests to take a walk. One of the outstanding features of this hotel is the seawater sauna, for which the seawater is drawn directly from the East Sea. The hotel has barbecue facilities that are open during the summer, and a parking lot big enough to park up to sixty cars. Nearby tourist destinations include Sogeumgang, Daegwallyeong, Gyeongpodae, Gyongpo Lake, Ojukheon House, Seongyojang, Jeongdongjin, and Jumunjin. 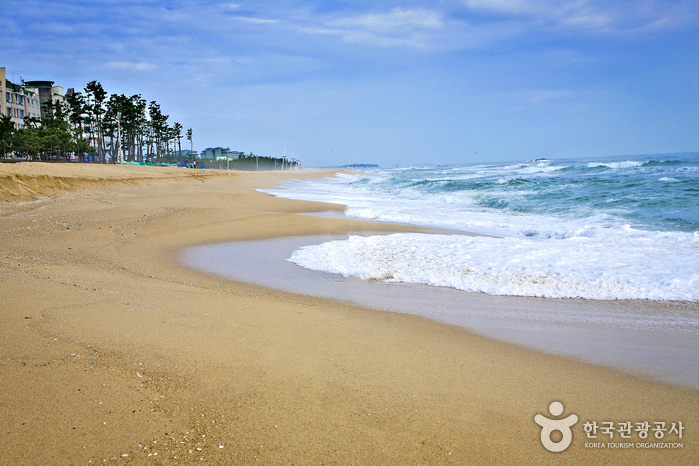 Located 1 kilometer away from Gyeongpodae and 6 kilometers from downtown Gangneung, Gyeongpo Beach is a sand bank formed between Gyeongpoho Lake and the ocean. This beautiful beach extends to a length of 1.8 kilometers and is covered with fine sand. It is a very well-known tourist attraction within Korea.

Gyeongpo Beach is famous for its picturesque sunrise and tranquil moonrise. There are other nearby attractions in the area, like the pine forest and wild roses, which grow in various areas around the beach. Many tourists enjoy riding bikes around Gyeongpoho Lake, or hiking at Seoraksan and Odaesan Mountains. 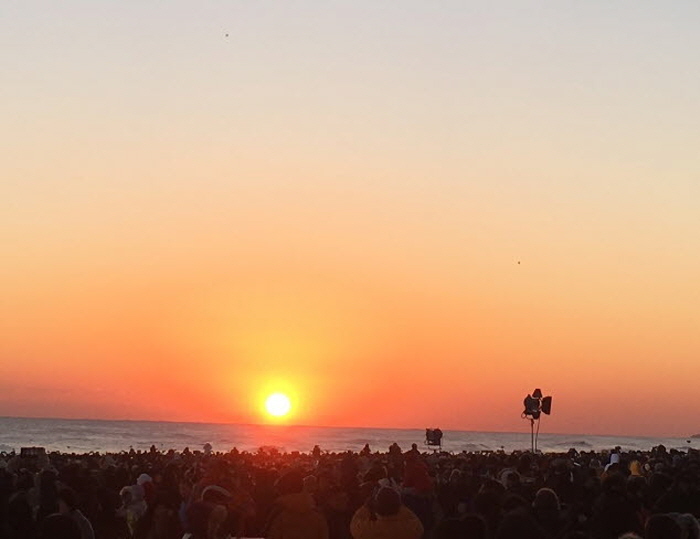 Gangneung hosts an annual Sunrise Festival from New Year's Eve to the first sunrise of the New Year. As well as visiting the area’s attractions such as Gyeongpodae Pavilion, visitors can welcome the New Year by watching a beautiful sunrise. The Sunrise Festival includes a countdown to the New Year, fireworks, and various enjoyable cultural events. 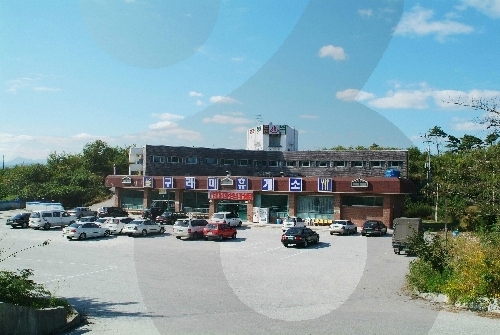 The waters of Guramy spa come from hot springs located 500 meters underground. The hot spring waters are perfect for children and old-aged patients since they contain very little salt and are therefore hypoallergenic. The waters are believed to be effective against neuralgia, muscular pains, and even women’s diseases.

Visitors can also drink the hot spring waters, which can help digestive ailments such as constipation. In addition, Guramy Spa’s hot springs water is said to gently soothe the skin to eliminate skin irritations, reduce pains, and is even great for dandruff problems. 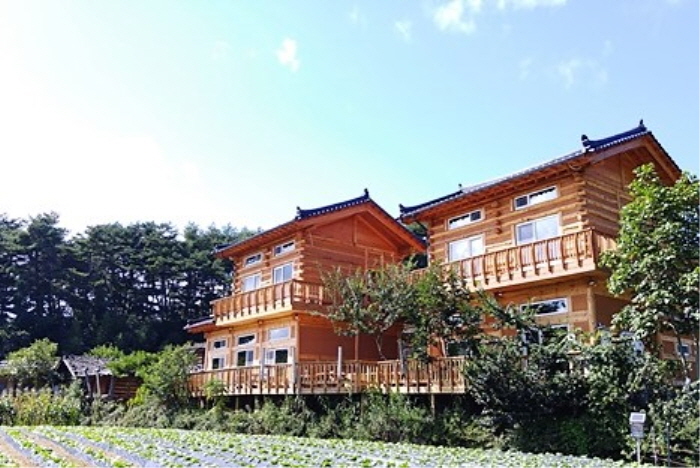 Located in Gangneung, Gangwon-do, Hyusim Pension is a small village featuring various types of hanok structures. It was built by highlighting the virtues of the traditional Korean house and by modernizing interior facilities such as kitchen and toilets. The beauty of hanok and natural scenery attract many tourists who can also experience different types of hanok buildings including tile-roofed house (inhabited by noblemen in the past), thatched house (by farmers), and log cabin (by slash-and-burn farmers in the mountain area). The pension consists of six buildings and ten rooms. All of the rooms were named after the pavilions located around Gyeongpo. In particular, Sarangbang was originally built as a Christmas present for the owner’s wife and is a very cozy room. Geumranjeong, Wolpajeong, Seokranjeong, Chwiyeongjeong, and Hohaejeong rooms are of the log cabin type, built by piling pine woods in 井-shape and covering the gaps between woods with clay. It used to be occupied by residents of Gangwon Province’s mountain area. Moreover, Hyusim Pension is full of interesting olden-day objects that will relieve memories among adults and remind the young generation of the forgotten culture. It is adjacent to Gyeongpoho Lake and Gyeongpodae Pavilion, offering a great night view of the lake and the splendid scenery of the sea. 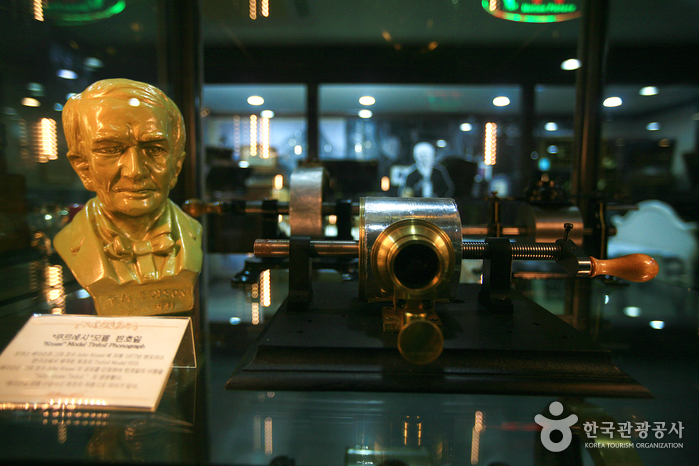 Charmsori Gramophone & Edison Science Museum founded by Son Seongmok is the largest gramophone museum in the world. It has a collection of 4,500 phonographs, 150,000 phonograph records, 1,000 books, and 5,000 items from 20 nations.
1) World of Sound: The place for history of Sound. It displays gothic and renaissance organs, music boxes, radios and record players.
2) World of Image: The place for silent films and biography films of masterminds and Edison. It displays Edison projectors and televisions, especially one made by Baird, John Logie (1888.8.13 ~ 1946.6.14) in 1925.
3) World of Light: Displays items from Gas lamps to the original light bulb that Edison made, an electric generator of those days, the bamboo filament light bulb and the first wall-attached electric lamp. The wall-attached electric lamp is the part of the collection that was successfully accepted at Sotheby's auction in 1992.
4) Edison Invention Hall: Displays 850 inventions of Edison's, including t three of his greatest inventions - phonographs, light bulbs and projectors. Also on display are autographed letters and articles used by Edison.
5) EDISON & H.FORD Hall: The battery car invented by Edison, "T" car by Ford, Henry and Grants Ham by HMV, phonograph company in England can be found here.

Located between Gangneung’s Gyeongpo Beach and Gyeongpoho Lake, Y&G offers both business hotel and pension rooms. Its wide rooms, outdoor barbeque area, board-game room, pool table, ping-pong table, and karaoke make it an ideal vacation site for groups or families. Y&G opens a free outdoor seawater pool in the summer, which enjoys much appreciation from families with young children. Both the hotel and pension rooms offer various room types, ranging from studio-type double occupancy rooms to four-person rooms with separate living rooms. The rooms are decorated with white, minimalist decor and equipped with a TV, refrigerator, dressing table, electric kettle, toiletries, and hairdryer. Sofas and tables can be found in every room for additional comfort. Some four-person pension rooms and four-person hotel rooms boast additional features in the form of roof windows with a view of the blue sky at daytime and the stars at night. Pension rooms are also equipped with a kitchen sink, induction stove, and cooking utensils. Moreover, other on-site facilities include a self-service convenience store and a laundromat. Breakfast is served as a buffet and reserved only for guests staying for more than 7 days or groups of more than 30 people.